What is Laparoscopic surgery?

Laparoscopic surgery is also called minimally invasive surgery (MIS), bandaid surgery and keyhole surgery. It is a specialized surgical technique in which operations in the abdomen are performed through small incisions or ports usually 0.5–1.5 cm. A large single incision is carried out in traditional open surgery procedures. Keyhole surgery uses images displayed on TV monitors for magnification of the surgical elements. Laparoscopic surgery can also be used for operations within the abdominal or pelvic cavities. Keyhole surgeries performed on the thoracic or chest cavity are called thoracoscopic surgery. Laparoscopic surgeries are popularly performed for Crohn’s disease, ulcerative colitis, rectal prolapse, cancer, diverticulitis and chronic constipation. 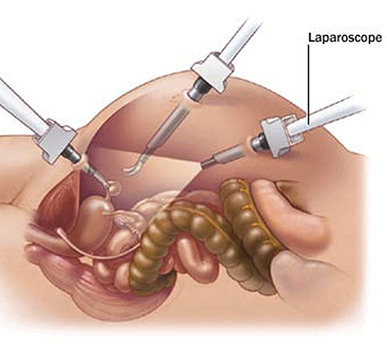 The laparoscope is a long, thin, fiber optic cable like a telescope which illuminates and magnifies the structures inside the abdomen. There are two types of laparoscopes:

A fiber optic cable system is attached which is connected to a ‘cold’ light source such as halogen or xenon. These are inserted through a 5mm or 10mm cannula or trocar to view the operative field. After prepping, the abdomen is insufflated with carbon dioxide gas. This elevates the abdominal wall above the internal organs like a dome creating a working and viewing space. CO2 is used because it is common to the human body and can be absorbed by tissue and removed by the respiratory system. It is also non-flammable, which is important because electrosurgical devices are commonly used in laparoscopic procedures.

A vast majority of the abdominal operations can be done by laparoscopy with excellent results, minimum pain and quick recovery.